Leonardo di ser Piero da Vinci  (April 15, 1452 – May 2, 1519):
was an Italian Renaissance polymath: painter, sculptor, architect, musician, scientist, mathematician, engineer, inventor, anatomist, geologist, cartographer, botanist, and writer whose genius, perhaps more than that of any other figure, epitomized the Renaissance humanist ideal. Leonardo has often been described as the archetype of the Renaissance Man, a man of "unquenchable curiosity" and "feverishly inventive imagination".He is widely considered to be one of the greatest painters of all time and perhaps the most diversely talented person ever to have lived. According to art historian Helen Gardner, the scope and depth of his interests were without precedent and "his mind and personality seem to us superhuman, the man himself mysterious and remote". Marco Rosci points out, however, that while there is much speculation about Leonardo, his vision of the world is essentially logical rather than mysterious, and that the empirical methods he employed were unusual for his time.

Born out of wedlock to a notary, Piero da Vinci, and a peasant woman, Caterina, at Vinci in the region of Florence, Leonardo was educated in the studio of the renowned Florentine painter, Verrocchio. Much of his earlier working life was spent in the service of Ludovico il Moro in Milan. He later worked in Rome, Bologna and Venice, and he spent his last years in France at the home awarded him by Francis I.

Leonardo was and is renowned primarily as a painter. Among his works, the Mona Lisa is the the best known, the most visited, the most written about, the most sung about, the most parodied work of art in the world, and The Last Supper the most reproduced religious painting of all time, with their fame approached only by Michelangelo's The Creation of Adam. Leonardo's drawing of the Vitruvian Man is also regarded as a cultural icon, being reproduced on items as varied as the euro, textbooks, and T-shirts. Perhaps fifteen of his paintings survive, the small number because of his constant, and frequently disastrous, experimentation with new techniques, and his chronic procrastination. Nevertheless, these few works, together with his notebooks, which contain drawings, scientific diagrams, and his thoughts on the nature of painting, compose a contribution to later generations of artists only rivalled by that of his contemporary, Michelangelo.
Leonardo is revered for his technological ingenuity. He conceptualised a helicopter, a tank, concentrated solar power, a calculator, the double hull, and he outlined a rudimentary theory of plate tectonics. Relatively few of his designs were constructed or were even feasible during his lifetime, but some of his smaller inventions, such as an automated bobbin winder and a machine for testing the tensile strength of wire, entered the world of manufacturing unheralded. He made important discoveries in anatomy, civil engineering, optics, and hydrodynamics, but he did not publish his findings and they had no direct influence on later science.

Journals and Notebook of Leonardo:
Renaissance humanism recognized no mutually exclusive polarities between the sciences and the arts, and Leonardo's studies in science and engineering are as impressive and innovative as his artistic work. These studies were recorded in 13,000 pages of notes and drawings, which fuse art and natural philosophy (the forerunner of modern science), made and maintained daily throughout Leonardo's life and travels, as he made continual observations of the world around him.
Leonardo's writings are mostly in mirror-image cursive. The reason may have been more a practical expediency than for reasons of secrecy as is often suggested. Since Leonardo wrote with his left hand, it is probable that it was easier for him to write from right to left.

His notes and drawings display an enormous range of interests and preoccupations, some as mundane as lists of groceries and people who owed him money and some as intriguing as designs for wings and shoes for

walking on water. There are compositions for paintings, studies of details and drapery, studies of faces and emotions, of animals, babies, dissections, plant studies, rock formations, whirlpools, war machines, helicopters and architecture. 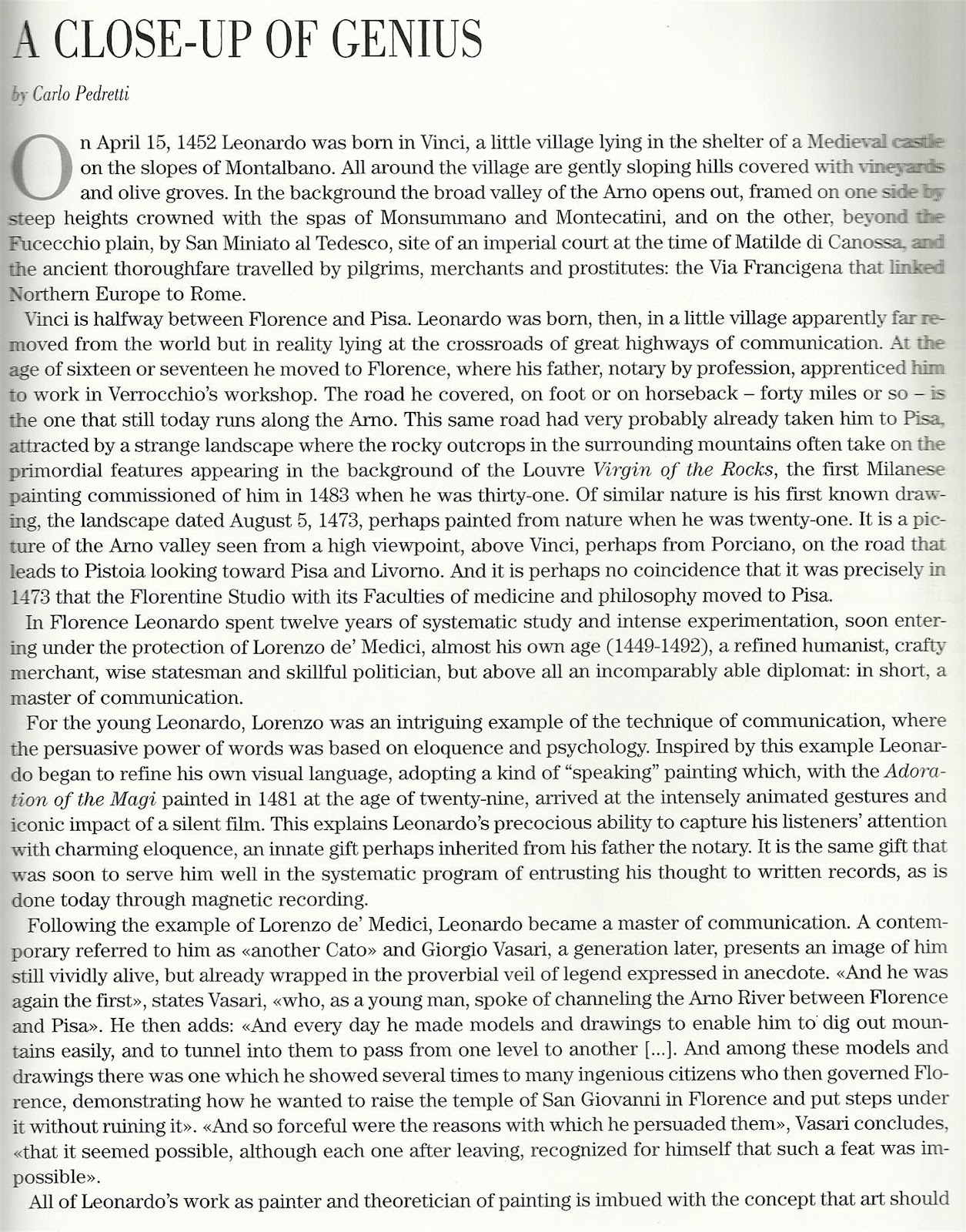