was a German-born theoretical physicist who developed the theory of general relativity, effecting a revolution in physics. For this achievement, Einstein is often regarded as the father of modern physics and one of the most prolific intellects in human history. He received the 1921 Nobel Prize in Physics "for his services to theoretical physics, and especially for his discovery of the law of the photoelectric effect".The latter was pivotal in establishing quantum theory within physics. 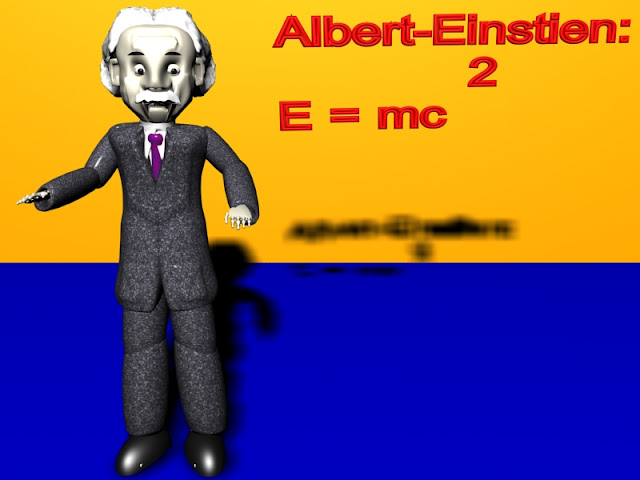 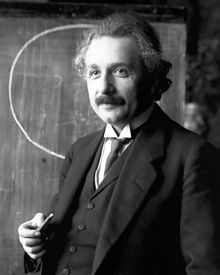 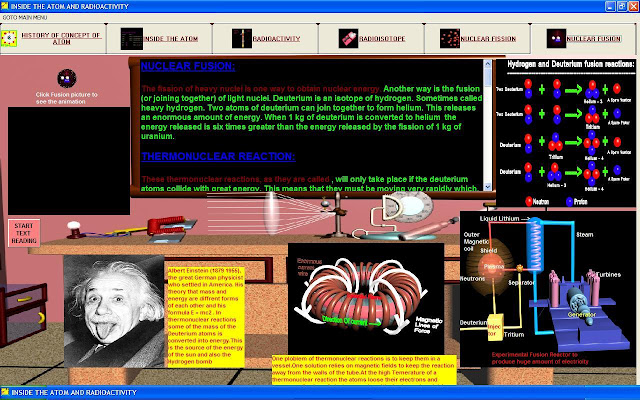 In physics, mass–energy equivalence is the concept that the mass of a body is a measure of its energy content. In this concept, mass is a property of all energy, and energy is a property of all mass, and the two properties are connected by a constant. This means (for example) that the total internal energy E of a body at rest is equal to the product of its rest mass m and a suitable conversion factor to transform from units of mass to units of energy. Albert Einstein proposed mass–energy equivalence in 1905 in one of his Annus Mirabilis papers entitled "Does the inertia of a body depend upon its energy-content?" The equivalence is described by the famous equation:

where E is energy, m is mass, and c is the speed of light in a vacuum. The formula is dimensionally consistent and does not depend on any specific system of measurement units. The equation E = mc2 indicates that energy always exhibits relativistic mass in whatever form the energy takes. Mass–energy equivalence does not imply that mass may be "converted" to energy, but it allows for matter to be converted to energy. Through all such conversions, mass remains conserved, since it is a property of matter and any type of energy. In physics, mass must be differentiated from matter. Matter, when seen as certain types of particles, can be created and destroyed (as in particle annihilation or creation), but the system of precursors and products of such reactions, as a whole, retain both the original mass and energy, with each of these system properties remaining unchanged (conserved) throughout the process. Simplified, this means that the total amount of energy (E) before the experiment is equal to the amount of energy after the experiment. Letting the m in E = mc2 stand for a quantity of "matter" (rather than mass) may lead to incorrect results, depending on which of several varying definitions of "matter" are chosen. 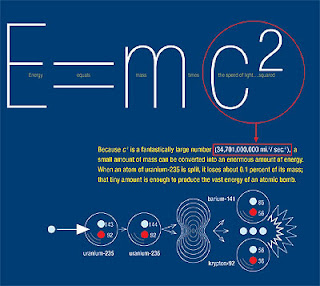 When energy is removed from a system (for example in binding energy, or the energy given off by an atomic bomb) then mass is always removed along with the energy. This energy retains the missing mass, which will in turn be added to any other system which absorbs it. In this situation E = mc2 can be used to calculate how much mass goes along with the removed energy. It also tells how much mass will be added to any system which later absorbs this energy.
E = mc2 has sometimes been used as an explanation for the origin of energy in nuclear processes, but mass–energy equivalence does not explain the origin of such energies. Instead, this relationship merely indicates that the large amounts of energy released in such reactions may exhibit enough mass that the mass-loss may be measured, when the released energy (and its mass) have been removed from the system. For example, the loss of mass to atoms and neutrons as a result of the capture of a neutron, and loss of a gamma ray, has been used to test mass-energy equivalence to high precision, as the energy of the gamma ray may be compared with the mass defect after capture. In 2005, these were found to agree to 0.0004%, the most precise test of the equivalence of mass and energy to date. This test was performed in the World Year of Physics 2005, a centennial celebration of Einstein's achievements in 1905.
Einstein was not the first to propose a mass–energy relationship (see the History section). However, Einstein was the first scientist to propose the E = mc2 formula and the first to interpret mass–energy equivalence as a fundamental principle that follows from the relativistic symmetries of space and time.

In physical cosmology, the cosmological constant (usually denoted by the Greek capital letter lambda: Λ) was proposed by Albert Einstein as a modification of his original theory of general relativity to achieve a stationary universe. Einstein abandoned the concept after the observation of the Hubble redshift indicated that the universe might not be stationary, as he had based his theory on the idea that the universe is unchanging. However, the discovery of cosmic acceleration in 1998 has renewed interest in a cosmological constant.

where R and g pertain to the structure of spacetime, T pertains to matter and energy (thought of as affecting that structure), and G and c are conversion factors that arise from using traditional units of measurement. When Λ is zero, this reduces to the original field equation of general relativity. When T is zero, the field equation describes empty space (the vacuum).

Equation of state
Another ratio that is used by scientists is the equation of state which is the ratio of pressure that dark energy puts on the Universe to the energy per unit volume.

ALBERT EINSTEIN and the ATOMIC BOMB:


The physicist Albert Einstein did not directly participate in the invention of the atomic bomb. But as we shall see, he was instrumental in facilitating its development.

In 1905, as part of his Special Theory of Relativity, he made the intriguing point that a large amount of energy could be released from a small amount of matter. This was expressed by the equation E=mc2 (energy = mass times the speed of light squared). The atomic bomb would clearly illustrate this principle.

But bombs were not what Einstein had in mind when he published this equation. Indeed, he considered himself to be a pacifist. In 1929, he publicly declared that if a war broke out he would "unconditionally refuse to do war service, direct or indirect... regardless of how the cause of the war should be judged." (Ronald Clark, "Einstein: The Life and Times", pg. 428). His position would change in 1933, as the result of Adolf Hitler's ascent to power in Germany. While still promoting peace, Einstein no longer fit his previous self-description of being an "absolute pacifist".

Einstein's greatest role in the invention of the atomic bomb was signing a letter to President Franklin Roosevelt urging that the bomb be built. The splitting of the uranium atom in Germany in December 1938 plus continued German aggression led some physicists to fear that Germany might be working on an atomic bomb. Among those concerned were physicists Leo Szilard and Eugene Wigner. But Szilard and Wigner had no influence with those in power. So in July 1939 they explained the problem to someone who did: Albert Einstein. According to Szilard, Einstein said the possibility of a chain reaction "never occurred to me", altho Einstein was quick to understand the concept (Clark, pg. 669+; Spencer Weart & Gertrud Weiss Szilard, eds., "Leo Szilard: His Version of the Facts", pg. 83). After consulting with Einstein, in August 1939 Szilard wrote a letter to President Roosevelt with Einstein's signature on it. The letter was delivered to Roosevelt in October 1939 by Alexander Sachs, a friend of the President. Germany had invaded Poland the previous month; the time was ripe for action. That October the Briggs Committee was appointed to study uranium chain reactions.

Research still proceeded slowly, because the invention of the atomic bomb seemed distant and unlikely, rather than a weapon that might be used in the current war. It was not until after the British MAUD Report was presented to FDR in October 1941 that a more accelerated pace was taken. This British document stated that an atomic bomb could be built and that it might be ready for use by late 1943, in time for use during the war (Richard Rhodes, "The Making of the Atomic Bomb", pg. 377+).

Einstein biographer Ronald Clark has observed that the atomic bomb would have been invented without Einstein's letters, but that without the early U.S. work that resulted from the letters, the a-bombs might not have been ready in time to use during the war on Japan (Clark, pg. 682-683).

Manhattan Project:(Atomic Bomb project by America)
The Manhattan Project was a research and development program, led by the United States with participation from the United Kingdom and Canada, that produced the first atomic bomb during World War II. From 1942 to 1946, the project was under the direction of Major General Leslie Groves of the US Army Corps of Engineers. The Army component of the project was designated the Manhattan District; "Manhattan" gradually superseded the official codename, "Development of Substitute Materials", for the entire project. Along the way, the Manhattan Project absorbed its earlier British counterpart, Tube Alloys.


The Manhattan Project began modestly in 1939, but grew to employ more than 130,000 people and cost nearly US$2 billion (roughly equivalent to $24.4 billion as of 2012. Over 90% of the cost was for building factories and producing the fissionable materials, with less than 10% for development and production of the weapons. Research and production took place at more than 30 sites, some secret, across the United States, the United Kingdom and Canada. Two types of atomic bomb were developed during the war. A relatively simple gun-type fission weapon was made using uranium-235, an isotope that makes up only 0.7 percent of natural uranium. Since it is chemically identical to the main isotope, uranium-238, and has almost the same mass, it proved difficult to separate. Three methods were employed for uranium enrichment: electromagnetic, gaseous and thermal. Most of this work was performed at Oak Ridge, Tennessee.
In parallel with the work on uranium was an effort to produce plutonium. Reactors were constructed at Hanford, Washington, in which uranium was irradiated and transmuted into plutonium. The plutonium was then chemically separated from the uranium. The gun-type design proved impractical to use with plutonium so a more complex implosion-type weapon was developed in a concerted design and construction effort at the project's weapons research and design laboratory in Los Alamos, New Mexico. The first nuclear device ever detonated was an implosion-type bomb at the Trinity test, conducted at New Mexico's Alamogordo Bombing and Gunnery Range on 16 July 1945. Little Boy, a gun-type weapon, and the implosion-type Fat Man were used in the atomic bombings of Hiroshima and Nagasaki, respectively. 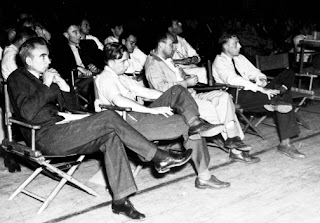 The Manhattan Project operated under a blanket of tight security, but Soviet atomic spies still penetrated the program. It was also charged with gathering intelligence on the German nuclear energy project. Through Operation Alsos, Manhattan Project personnel served in Europe, sometimes behind enemy lines, where they gathered nuclear materials and rounded up German scientists. In the immediate postwar years the Manhattan Project conducted weapons testing at Bikini Atoll as part of Operation Crossroads, developed new weapons, promoted the development of the network of national laboratories, supported medical research into radiology and laid the foundations for the nuclear navy. It maintained control over American atomic weapons research and production until the formation of the United States Atomic Energy Commission in January 1947. 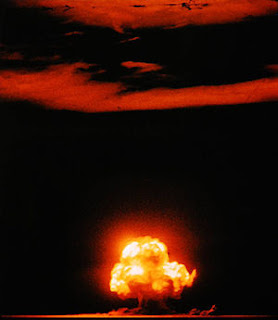