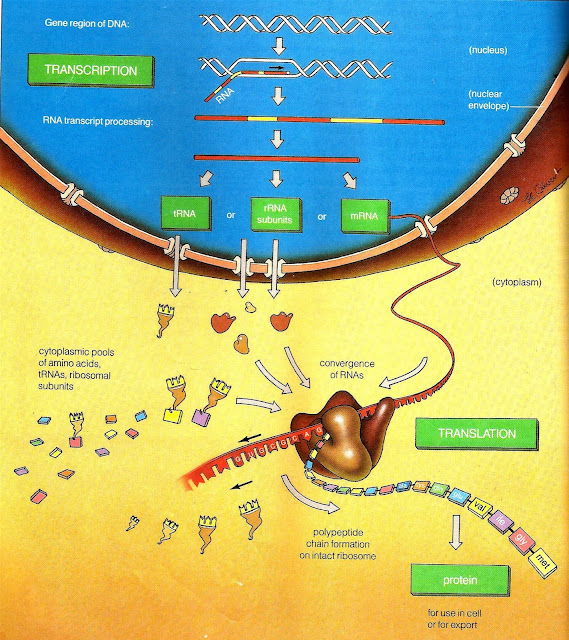 PROTEIN SYNTHESIS:
Protein biosynthesis or Protein Synthesis is the process in which Cells build or manufacture Protein. The term is sometimes used to refer only to protein Translation but more often it refers to a multi-step process, beginning with amino acid synthesis and Transcription of nuclear DNA into messenger RNA which is then used as input for translation.
Protein synthesis occurs in two stages.In transcription an exposed region of one strand of the DNA double-helix serves as the template for assembling an RNA strand.In translation three classes of RNA molecules interact to convert the message originally encoded in DNA into a polypeptide chain:
A) rRNA : a structural part of the ribosome on which the polypeptide chain is assembled.
B) mRNA : The actual blueprint for building a polypeptide; it consists of a sequence of nucleotides that are "read" in
blocks  of three (base triplets).
C) tRNA   : An adaptor molecule that has both an attachment site for an amino acid and three base triplets that can pair
with a base triplet in mRNA.
1) The relationship between a sequence of amino acids it specifies is called the genetic code.In mRNA, each base triplet is called the genetic code.In mRNA each base triplet is called a codon. In mRNA , each base triplet is called a codon.In tRNA, the complementary base triplet is called an anticodon.
2) Transcription  follows the same base-pairing rule that applies to DNA replication, but in this case uracil (Not
Thymine) is paired with the adenine present in the DNA template strand:
3) In eukaryotes, mRNA transcripts undergo extensive modification before they move into the cytoplasm for translation.
To give one example: its introns (nucleotide sequences that do not code for parts of the polypeptide chain) are
excised and the exons (coding sequence) are spliced together.
4) Translation consists of 3 stages:
a) Initiation :  A small ribosomal subunit binds with an initiator tRNA, then with an mRNA trancript. The small subunit
then binds with a large ribosomal subunit to form the initiation complex. b) Chain Elongation: tRNAs deliver amino acids one after another to the ribosome, with the tRNA anticodons pairing
to different codons that occur one after the other in the mRNA; then peptide bonds form between the amino-
acids. c) Chain Termination:  A stop codon triggers events that cause the polypeptide chain to detach from the ribosome. 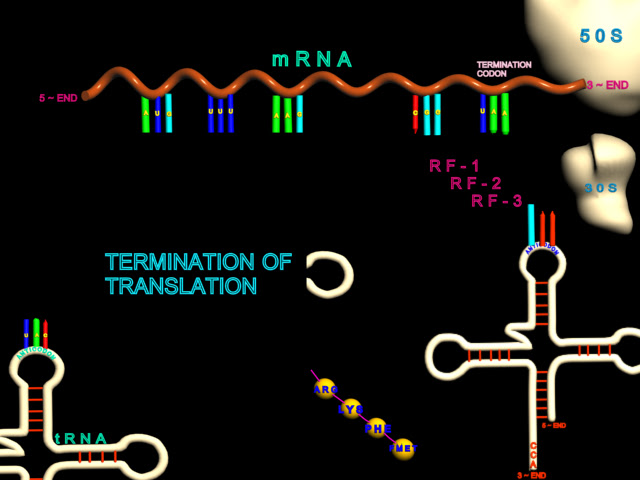 5) Overall, the protein-building instructions encoded in DNA are preserved through the generations.But the instruction are sometimes altered as a result of three types of events.
a) Gene Mutation:
b) Crossing over and recombination:
c) Chromosomal Aberration:

Video animation of Translation and Transcription: